Be the first to review this product
As low as £1,059.00
In stock
SKU
naish-pivot
Details

The Naish S25 Pivot's predictable power development, direct bar feel, intuitive steering and plenty of “sheet-in-and-go” are just a few characteristics that make the Pivot one of the most sought-after kites on the market.

For S25 there is a new adjustment system for the bridle to give the Pivot even more range. It was inspired by the KOTA riders who want to ride the biggest kite possible in super strong winds. It is also beneficial for strapless wave riders who don’t need the super strong pull. Naish’s flagship kite, the Pivot continues to lead the charge in innovation and performance.

This year Naish have fine tuned the tension in the whole canopy by adding a seam that spreads the back line tension further towards the center of the kite for an even more powerful and balanced kite as well as the new OnePoint and SureLock Inflation System. The Pivot also comes with Bladder Lock, which eliminates the risk of bladder movement in the leading edge and struts to ensure they stay in place when inflating, defl ating, crashing or packing. While the Pivot has received various tweaks and improvements that enhance the performance characteristics, it continues to stay true to its loyal following and remain as one of the most sought after kites worldwide

Perfect for both novice and professional kiters alike, the Pivot provides plenty of sheet-in-and-go, predictable power, direct bar pressure, easy jumping and control in the air. The superior choice for versatile performance, the Pivot maintains a large wind range, proving dynamic and responsive in everything from waves to flat water.

Dynamic and responsive, it pivots quickly and easily on a small axis of rotation—with minimal power increase through turns—for super-smooth carving through waves and enhanced control going into and out of kiteloops.

The Pivot continues its subtle evolution with an adapted profile, making it more balanced, reliable and predictable. Incorporating the Shark Teeth feature on the trailing edge gives the Pivot an even more aerodynamic profile. This makes the Pivot lighter while keeping it forgiving, with outstanding low-end power and direct bar feel.

Easy-handling, well-rounded and incredibly versatile, it’s clear to see how the Pivot has become the all-around choice for everyone, everywhere.

Taking this sought-after C-kite to the next level, the addition of the Quad-Tex canopy makes the Pivot practically indestructible. Already engineered for solid control and handling in strong winds, the addition of Quad-Tex’s 4x-reinforced ripstop and perfectly balanced weave matrix—testing 30% stronger and stiffer than any other around heightens the stability and responsiveness of the Pivot design. The pinnacle of freestyle performance just became stronger and more accessible; time to experience the pure precision of the Pivot.

Strategically placed triangular swaths work with Quad-Tex to reduce weight on the kite while minimizing and dispersing canopy flutter.

The Naish Pivot is a kite that depowers by flying to the edge of the window. Compared to other kites, the Pivot’s foil profile is thinner, and its Leading Edge diameter is smaller.

These two characteristics allow the kite to fly further forward in the window, and get there fast. This gives it the ability to depower quickly.

The profile’s depth and shape evolves along the airfoil, helping create a fast flying, stable kite with less back stalling.

The centre sections generate power thanks to a deeper profile, while the flatter profile in the tips minimizes drag and allows faster turning.

The more efficient the lift/drag ratio becomes, the faster the wing tip can move through the air. This allows the kite to be both quicker and more responsive through turns.

Naish’s exclusive one-way internal valve ensures that the pressure within the struts does not change during turns.

Riders of all levels, from pros to newcomers, will all gain substantial advantages from the new Naish ATB Control System.

The Naish ATB Control System has a new front line configuration. The front lines now have a 3m single line to a Y point. The front flagging leash system has been improved and weight saved by removing the stainless Centre Line Organizer and Swivel.

The result is a simple and functional control system that provides the rider with greater confidence in its functionality in all situations.

With a greatly improved “through the bar” front line leash system, and new larger floaters, the BTB Control System is more streamlined and functional than ever before.

All kite sizes can be flown with the same bar. 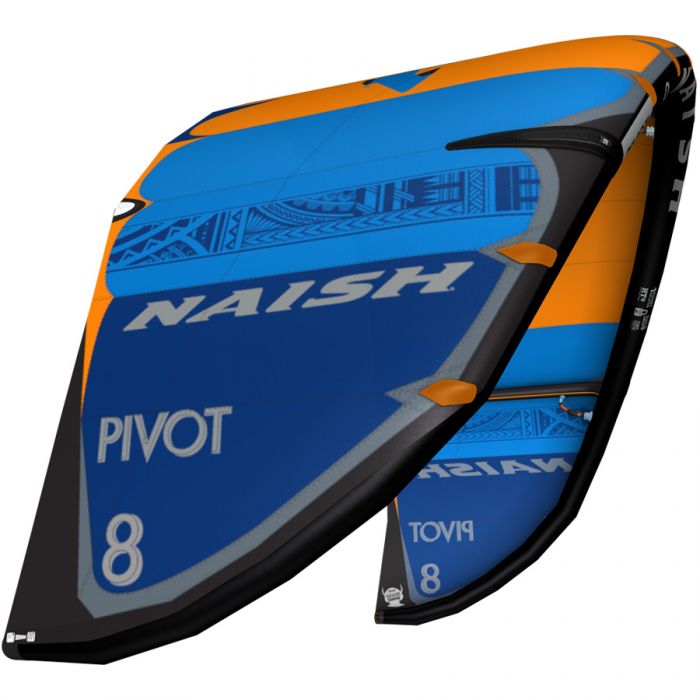